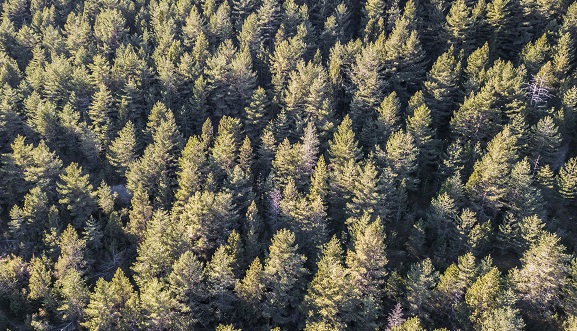 The pine processionary moth (Thaumetopoea pityocampa Dennis and Schiff.), one of the major defoliating insects in Mediterranean forests, has become an increasing threat to the forest health of the region over the past two decades. After a recent outbreak of T. pityocampa in Catalonia, Spain, we attempted to estimate the damage severity by capturing the maximum defoliation period over winter between pre-outbreak and post-outbreak images. The difference in vegetation index (dVI) derived from Landsat 8 was used as the change detection indicator and was further calibrated with Unmanned Aerial Vehicle (UAV) imagery. Regression models between predicted dVIs and observed defoliation degrees by UAV were compared among five selected dVIs for the coefficient of determination. Our results found the highest R-squared value (0.815) using Moisture Stress Index (MSI), with an overall accuracy of 72%, as a promising approach for estimating the severity of defoliation in affected areas where ground-truth data is limited. We concluded with the high potential of using UAVs as an alternative method to obtain ground-truth data for cost-effectively monitoring forest health. In future studies, combining UAV images with satellite data may be considered to validate model predictions of the forest condition for developing ecosystem service tools.